The Origin of Toy Spaniels

Having done an in-depth study of the four toy spaniels for a judging course I think you would be suprised, as I was, at how intermingled the four breeds originally were. One of the best books that I found was Toy Dogs and their Ancestors by the Hon. Mrs. Neville Lytton. I think there are only a few copies around one being in the KC library. I was lucky enough to be lent one. According to this book you can trace the start of all toy spaniels back as far as Tibet and China in the 8th century BC. In various forms and crosses they travelled across Europe with Royalty and traders. Someone called Buffon states that in 1750 England had Black spaniels called Gredius and he gave the name Pyrame to the ones that had Fire marks over the eyes, on the muzzle, throat and legs. 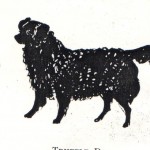 This is one theory of where the B/T came from. Another was that the B/T came from the Spanish Truffle dog or variety of water spaniel.This would account for the curly coat of the original B/T. 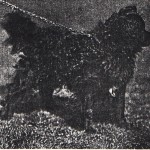 According to research it has been proved that the toy spaniel was around for a couple of centuries before the Marlboroughspaniels from which the King Charles and the Cavalier are supposed to have evolved. The probable original type kept by Marlborough was the Cocking or Springing spaniel, which were larger types. They were also longer in the body. They had the spot on the head, which is thought to have come from a cross with the white Holland spaniel, which had the spot, as early as 1500. This was thought to account for the rareness of the spot in the short nosed spaniels and the prevalence in the longer nosed spaniels. There is still a small Welsh Springer, which nearly always has the spot. 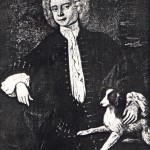 There were clearly two different sizes of spaniel in England at this time. The true toy spaniel brought from the East via Europe and the Cocking and Springing (Marlborough) type. 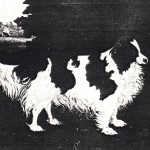 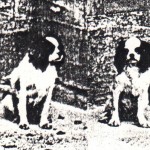 This information came from a variety of places. The kennel club library was a vast source of information but it took a lot of finding. The old KC club magazines going back to 1911 and the Illustrated Kennel news back as far as 1910 were great sources of information and also Hutchins Popular and Illustrated Dog Encyclopaedia.  One of the greatest sources was a great lady in papillons called Miss Clarice Waud. She had papers and articles going back  many years. She has written books with Mark Hutchins about the papillon. It took about 9 months to get all the information on the four toy breeds. A labour of love! 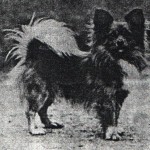 There is a theory that the first Chinese spaniels and the Peke originated from the Tibetan spaniel, which is thought to be one of the first Pure bred dogs of that time. If you see the early pictures of the Tibetan spaniel it has a very strong resemblance to the papillon in head and size.

They were originally Judged, in 1885, as four separate types. It was not until 1902 that it was decided that, as you could get all four colours in the same litter, they must all be of the same family. They were then judged all together under the name King Charles spaniel. The first standard was drawn up in 1885.

Go to Part Two : The Cavalier King Charles Spaniel
Return to About Cavaliers