The Origin of Toy Spaniels

As we have seen earlier the small long nosed spaniel was around for many centuries before we eventually came back to the Cavalier. In 1926 an announcement was made in the catalogue of Crufts 1926 dog show. It read as follows:-“Blenheim spaniel of the old type, as shown in the pictures of Charles II’s time. Long face, no stop, flat skull not inclined to be domed, with a spot in the centre of the skull. The first prize in Classes 947 and 948 are given by Rosewell Eldridge Esq. of New York, and will be continued for five years. Prizes go to the nearest to type required.” This gentleman was determined to bring back the original cavalier of King Charles’ time. He put up the prize of 25 pounds for the best long nosed dog. He was horrified that the long nose had been systematically bred out in favour of the very short nose. Unfortunatly he never lived to see the results of his labours. In the first year only two dogs were entered as the King Charles breeders were horrified by what was being proposed. However interest was generated and a handful of exhibitors took up the challenge. These included Mrs Amis Pitt. She was formerly a Chow Chow breeder but could not resist the challenge. With her were Mme Harper Trois-Fontaines and  several others. 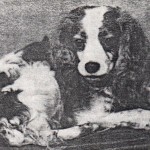 The first Cavalier club was registered in 1928. There were very few long nosed dogs left to breed from so they had to use the ones thrown out by the King Charles breeders.A popular theory is that the drop-eared Papillon, The Phalene, was used to bring back the long nose and this is born out by the dog Anns Son. It was said that he was the result of a mating between a Tri bitch and a Papillon male. Anns Son was a true toy spaniel. He weighed about 10-12 lbs., was a dainty Blenheim, fine muzzled with a flat skull and long ears. He had lovely dark eyes. “Wizbang Timothy”, Anns Son’s brother was a Tri dog, though not as attractive, as he was nearly all black and white. He proved to be a very good stud dog though. All Cavaliers today go back to these two dogs in some way. 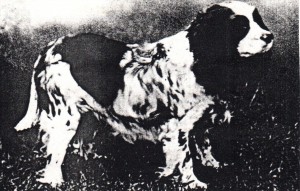 The first breed standards was drawn up with “Anns Son” standing on the table acting as the blueprint. This was drawn up by the first club committee. “Wizbang Timothy”, as I have said, did have a great effect on the breed even though he was not a very good specimen himself. He was mated to a Ruby daughter of “Anns Son” called Lucky of Twitch and they produced a Tri colour called Bridget of Ttiweh on 24th August 1929. She played quite a roll in the show ring in the 1930’s. She was considered a very good dog of her time, though we would think otherwise now (she looked more like a blue roan cocker with a saddle back).

Another bitch, which had an effect on the breed, was “Blenheim Palace Poppet” bred at Blenheim Palace. She was bought for a Mrs Jennings by her husband in 1926. She was mated to “Timothy of Ttiweh”, Mrs Hewitts dog, Bridgets full brother, and produced “Timonetta of Ttiweh” who was a key bitch behind most of the present day Cavaliers. When mated again to “Mark of Ttiweh”,(Anns Son Grandson) she produced “Plantation Pixie”, another important ancestor of Cavaliers today. It was thought that Poppies puppies were to big but Mrs Jennings persevered and the resulting Plantation dogs had a great influence on the breed.

Other stud dogs, which had an influence from that time, were “Carlo of Ttiweh”(Blen) and “Duce of Braemore”(Tri). Both were short nosed dogs who sired long nosed puppies. The short nosed dogs were used as late as 1935 e.g. “Springvale Pharoah”. He was very short faced. Another influential dog was “Kobba of Kuranda”. The first B/T used in the early days as he was the only one who produced the correct head.

These were the stud dogs, which have founded the Cavalier of today. The First Generation! In the second generation some of the influential dogs were “Peter of Ttiweh”(ruby by Anns Son). He was thought to be of excellent type but much too big. “Dukes Son”(Blen. by Anns Son) was another. The breeding was very much curtailed be the war and Mme J Harper Trois-Fontaines managed to keep her dogs going despite the rationing. These were then inter bred with the few remaining dogs that the main breeders had managed to keep. 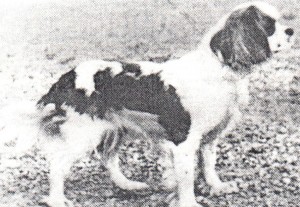 The first Ch. show was held on 29th August 1946. The judge was Mrs Jennings of the Plantation Cavaliers. The best in show was Mrs K Eldreds “Belinda of Saxham” by “Dukes Son” x Linooga”. She did not make Champion because of the war but made her mark by throwing “Ch Little Dorrit of Ttiweh”, another key bitch of her day. The best dog was “Daywell Roger” Blen born in 1945 who was to become the first Cavalier Champion. He was owned by Mrs Pitt and bought unseen as the nearest type to “Anns Son”. He was the father of 11 champions. 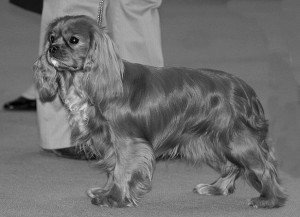 The breed has gone from strength to strength since those days and is now the lovely Cavalier type that we see today.