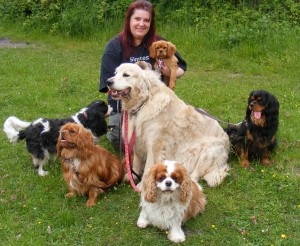 All Four Colours and Buddy

Over the years I have seen various television programmes and news reports extolling the virtues of Therapy Dogs and thought what a wonderful idea it seemed to be.  I worked as a nurse for a number of years and many of the inpatients often complained of missing their pets while they were in hospital. I always thought it sad that a family member could not bring the pet in for a short time to visit just to cheer the patient up a little. I know how I would feel if I had to be away from my menagerie (there are 11 cats as well as 6 dogs) for any significant amount of time. But with all the red tape, rules, regulations, Health and Safety and Infection Control considerations these patients (certainly those at the Hospital where I worked) were doomed to a depressing stay without the unconditional love and support of their pet to aid and speed up their recovery. Then when I moved out onto the District as a nurse I really began to see the effect pets really had on patient recovery including their mental as well as their physical health. 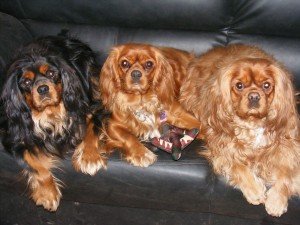 6 years later, Charlie Beau aka Prince Red Alert came into my life as my first Ruby Cavalier (Part of my O.C.D.C means I have at least one Cavalier of every colour!) I met him when he was just 5 weeks old and he joined the family 4 weeks later and settled in very quickly. A much laid back chunky puppy Charlie grew into a big, beautiful and happy adult with the most fantastic long, flowing coat and an addiction to cuddles. When he was around 18 months old he began exhibiting the classic bunny hop and yelp associated with luxating patella and so off he went to see his vet and this resulted in surgery. Both knees were equally bad so it was only on the day of the surgery that the vet made the decision which knee to operate on. The surgery wasn’t completely successful however and Charlie has been left with a limp.

To help build and maintain muscle to help support both knee joints he began having regular hydrotherapy sessions. His hydrotherapist was taken aback with Charlie’s ever happy disposition and constantly wagging tail and one day commented what a wonderful Pets As Therapy Dog he would make as whenever she saw him she couldn’t help but smile and feel cheerful. Such is Charlie’s zest for and love of life, it really is infectious and just looking at him in particular of all my Cavaliers, no matter how bad my day has been, Charlie can always raise a smile with his cheerful face and ever-wagging tail, trotting over to greet me with a favourite toy in his mouth. And so I thought ‘You know what, he would!’ As soon as we came home from his swim I sent off for an application pack and began the long process of the application and assessment procedure to get him assessed as a P.A.T Dog.

The process was stringent indeed. I was thoroughly checked out for my suitability as a volunteer as was Charlie for his health and temperament.  This included an assessment made by a Pets As Therapy assessor in a branch of a large Pet store. The majority of it was carried out by a pen containing a myriad of rabbits and guinea pigs and I’m proud to say Charlie was more concerned with having cuddles off the assessor than taking any notice of the small furry creatures squeaking noisily right beside him. You are not told by the assessor if you have been successful or not so it was an anxious wait to hear from head office. 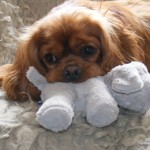 Charlie Beau with his Toy

The letter finally came that we had been accepted and we were able to begin visiting right away as we both had our official ID cards, but we wanted to look the part in our smart uniform and so sent in our order form straight away. I was given a list of some 39 establishments within a 5 mile radius of my home who were on a waiting list for a visit from a P.A.T Dog. The hardest part was that the job of a P.A.T Dog is not a full time role and so I knew that only a select few would get to benefit.  I decided the fairest way to tackle the list was to start with those places that had been waiting longest, in some cases as far back at the year 2000!.

As volunteers you can give as much or as little of your time as you want, but for the welfare and wellbeing of the visiting dog, visits are restricted to a maximum of one hour only. My own availability due to my workload is also restricted and so we are limited to the amount of visits we can do each week. We have a regular Monday morning visit each week into a residential home and do occasional visits on alternate Wednesday mornings (Charlie swims every other Wednesday) as and when required.  I have chosen to focus on elderly care as most of my knowledge and experience as a nurse is with this sector of the population. But you can choose to work with children or special needs or rehabilitation or any other sector of health, social care and education, or indeed anywhere that has requested a visit. 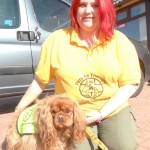 After only a couple of visits to our regular care home, the residents began to really look forward to seeing Charlie.  As we walked through the corridor to the lounge we could hear them calling out “Oh! Here comes Charlie!” and “Quick everyone, Charlie’s here!” Charlie has his own routine he likes to follow. He dashes into the lounge, drops his toy in the middle of the room with a single bark, then does a little stroll/dance around the room (imagine a cat walk model strutting her stuff and that gives you an idea of Charlie’s entrance!)  He then makes his way slowly round each resident in turn, greeting them and allowing them to pet him for a while before moving on to the next. A couple of the ladies have even changed seats so they can be first to receive Charlie’s attention! He knows the ones who will entertain him with a game of ‘fetch’ and those who just want a cuddle.  When he reaches the first of those who will play with him, he goes and fetches his toy from where he left in and takes it over to them for a little game before moving on again for more cuddles. 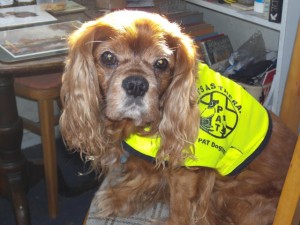 Oliver is also a PAT Dog

The room really does light up when Charlie walks in and the resident all break into a smile. Every week they never tire of marvelling at his ever-wagging tail and it’s always the topic of conversation. One of the ladies has lost her sight but 2 of the ladies she sits with take great delight in describing Charlie’s every move to her.  It’s heart-warming to know Charlie helps them to interact and communicate with each other like this.

There is one particular story I would like to share with you, and if any of you doubt the power of a dog to really make a difference, I hope this will show you that they really can. 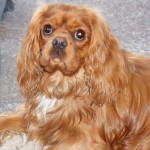 It was one of our regular visits and I noticed one lady we hadn’t seen before who was sat alone at the far end of the lounge. Charlie noticed her and once he had greeted his regular friends he made his way straight over to her. I introduced myself and Charlie and the lady smiled and quietly asked if she could pet Charlie, which of course I said was OK. She began stroking him and talking to him telling him what a beautiful coat he had and what a handsome boy he was. She proceeded to tell him all about her neighbour’s dog at home and how much she missed seeing her and being at home. I noticed that she didn’t have a local accent and asked her where she was originally from. She never looked at me once but continued talking to Charlie as he stroked his ears, relating a fascinating story.  She was born and raised in South Africa, but then during the war she joined the WRAF and was posted to Cairo. There she fell in love with an English soldier. They met and married within 6 months and after the war was over she came home to the local area with him and had been here ever since. Sadly he had died 18 months previously and of course she missed him terribly.  At this point she received a visitor and reluctantly said goodbye to Charlie asking if he would come and see her again tomorrow. I explained we only came once a week but would see her again in a week’s time.

After she left with her visitor the Activities Co-ordinator came over to me and thanked me for what I had done.  I wasn’t sure what she meant, so she explained that this lady was there for a week’s respite care. She had been at the care home for 4 days and had not spoken one single word to anyone, yet had spent 20 minutes or more non-stop talking to Charlie. I felt so proud of my boy and so very humbled to have shared that experience.  I did say to the co-ordinator that I had done nothing. It was Charlie who has broken down the barriers and allowed her an outlet to talk.

Our animals do such a wonderful job of just listening and not passing judgement. Clearly this lady was feeling confused and isolated at finding herself in an unfamiliar environment but Charlie was unable to unlock that that feeling of isolation and allow her some semblance of normality and offered her unconditional companionship, even if just for a short time.  So please, if any of you have an hour to spare and a dog with a sound temperament and want to make a difference to those who are unable to be close to an animal for whatever reason, PLEASE consider becoming a Pets As Therapy volunteer. All you need to do is turn up and let the magic begin to work. I promise you it will be one of the most gratifying things you will ever do.