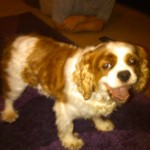 We bought Bonnie in May 2003 at 8 weeks old from a Kennel Club registered breeder from Glenrothes in Fife Scotland. She came with 5 generation family history, her mum won best of breed for 3 years and when we went to pick her up we met her mum and all the other dogs the lady bred & they all looked healthy. The reason she was selling Bonnie was she was not suitable to show. So we picked her up and she was full of energy and mischief. We had her health checked and vaccinated at the vets, all was well, no health problems found.

Right from word go Bonnie did not want to be stroked and was always on the go. We decided to get another Cavalier King Charles Spaniel, this time a tri-colour and we went through the same channels, through the Kennel Club breeders register and this time we got Pepsi from the Glasgow area and this time we were able to see mum and dad. Mum did look a little thin and a bit bald at the back end. When we got Pepsi home she was poorly, we took her to the vet and it was campylobacter and unfortunately it was passed on to our other dogs, so it was a tough few weeks, but through the strict diet and lots of TLC they made a full recovery . We were advised by the vet to report these breeders to the SSPCA which we did but we never heard anything.

Other than that Bonnie was a healthy young Cavalier full of fun and mischief , although when we took Bonnie on a walk she would come back scratching. When we took her to the vet they said to change where we walk her and put it down to allergy to something on the walk .

For the next 4 years Bonnie was well except she was always biting/chewing her feet and cleaning until she would yelp in pain. You had to distract her almost like OCD but  the vet could not find a reason for this problem and no skin problems.

When Bonnie was 5 years old she started running around the house rubbing her face, ears and back up and down the carpet and couch. We spoke to vet but she knew of no reason for this. 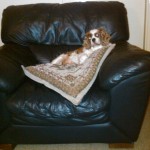 In 2010 Bonnie was in season and it seem to go on a while so we took her to vet. They said she would need spaying and gave us antibotics but within 2 days she was taken in as a emergency, she has pyometra (we were going to breed Bonnie but due to moving and unable to find a stud we never got her done) Bonnie has a hysterectomy and recovered well, there was no other health problems and no sign of a heart murmur.

We moved house again as my husband is in Royal Air Force and we move house and vet every 3 years. In April this year (2012) we found a dog groomer that makes house calls. I was talking to her about Bonnie and her weird behaviour and she asked me had I watched BBC  Pedigree Dogs Exposed as she said Bonnie was showing signs of Syringomyelia and Chiari Malformation. After she had done the dogs I went straight onto Youtube and found what she was talking about, I could not believe what I was seeing, Bonnie had all the signs of these problems.

Excessive biting /chewing of the feet until she yelped and had to be distracted.

Excessive barking for no reason in house and out on walk.

Sensitivity of feet in hot and cold weathers and rubbing her mouth, face and ears.

Constant licking as if she was licking something invisible.

Then in June 2012 we noticed that Bonnie kept having little wobbles every now and then. A few days later they were getting worse, I tried to catch it on video but because it lasted a few seconds I could not catch it. So I searched on Youtube and found a video of hypoglycemic seizure which was like what Bonnie was having, so I took Bonnie to the vet and showed the video and she decided to take blood tests in case it was diabetes. All blood test came back clear so they decided to do a heart scan and neurological test. They found a heart murmur, grade 3, no need for medication. We asked was Bonnie in pain and they said no she was not in pain. So the next option was to go to see the neurologist and have a MRI scan so we went to the Royal Vet College, London (Hatfield) They did lots of tests and a MRI scan as they suspected Syringomyelia and Chiari Malformation and glue ear. When she had the scan they confirmed all of the above and put her straight away on Metacam and Gabapentin. We asked her if she was in pain and they said yes, which upset us as we had asked and was told no.  We asked about the seizure like episodes and he seem to think it was related to CMSM but after 10 days of being on the tablets the seizures were getting worse. She was very hot and bothered, unsteady on her feet, looking for cold spots more than before, unable to find a comfortable spot. She wanted to sit with you but did not want to be touched. She was still scratching and chewing and it was distressing to see so I spoke to the neurologist and vet and said she was worse than before and the seizures were getting longer and stronger. He said he had hoped Bonnie would  have reacted better, they could try lots of different tablets but they may never find out what was causing the seizures which he called idiopathic seizures.

We spoke as a family and decided we did not like seeing Bonnie suffering any more and we decided to have her put to sleep,  I had spoken to the vet and neurologist and they agreed with us . I contacted Margaret Carter and said I would like to donate Bonnie to the Cavalier Collection scheme. They were amazing and got things sorted right away and we took Bonnie to the Cambridge Queen Mother Vet Hospital and they were so kind and understanding and took good care of Bonnie and us. They put Bonnie to sleep and allowed us to have time with her and they stayed with her when we went and then took her away to remove the cell tissue samples. We as a family can’t thank everyone involved in the research for their kindness. THANK YOU these people who are doing all this research to help find a cure for these horrible illness, you are amazing. Thank You for fighting for these Beautiful Dogs